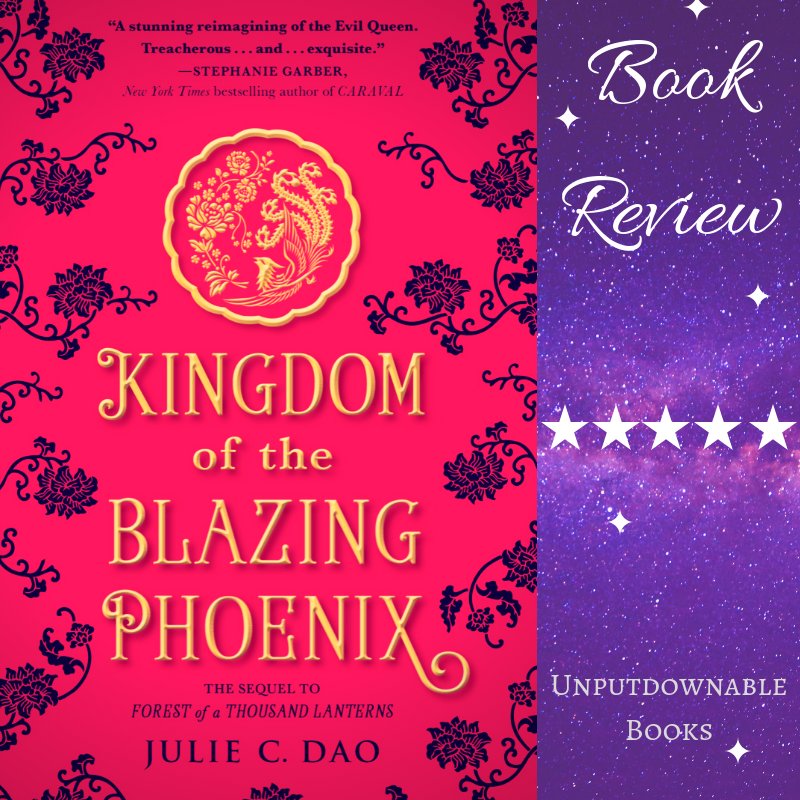 Princess Jade has grown up in exile, hidden away in a monastery while her stepmother, the ruthless Xifeng, rules as empress of Feng Lu. But the empire is in distress and its people are sinking into poverty and despair. Even though Jade doesn’t want the crown, she knows she is the only one who can dethrone the empress and set the world right. Ready to reclaim her place as rightful heir, Jade embarks on a quest to raise the Dragon Lords and defeat Xifeng and the Serpent God once and for all. But will the same darkness that took Xifeng take Jade, too? Or will she find the strength within to save herself, her friends, and her empire?

END_OF_DOCUMENT_TOKEN_TO_BE_REPLACED

Most of the times, you read a book, really enjoy it and write up a glowing review, which is swallowed up by the Internet void. Some other times someone with similar reading tastes notices it and you become the best of friends online until the end of time. And then there are those few rare ones that get you an interview from the author!

END_OF_DOCUMENT_TOKEN_TO_BE_REPLACED

Nora knows three things: she is a servant, her parents are dead, and she lives in the kitchen house with her adoptive family. But her world is torn apart when she discovers that her birth father has always been right there, living in the house she serves. This discovery leads Nora to more questions. Why was she thrown in an ash-covered room for asking about her father? Why is a silver-bladed knife the only inheritance from her birth mother? Why is magic forbidden in her household—and throughout the province of the Runes? The answers may not be the ones Nora hoped for, as they threaten a possible romance and her relationship with the adoptive family she loves. With the announcement of a royal ball, Nora must decide what she is willing to give up in order to claim her stolen birthright, and whether this new life is worth losing her family — and herself.

END_OF_DOCUMENT_TOKEN_TO_BE_REPLACED

Title: Forest of a Thousand Lanterns (Rise of the Empress #1)

Eighteen-year-old Xifeng is beautiful. The stars say she is destined for greatness, that she is meant to be Empress of Feng Lu. But only if she embraces the darkness within her.
Growing up as a peasant in a forgotten village on the edge of the map, Xifeng longs to fulfill the destiny promised to her by her cruel aunt, the witch Guma, who has read the cards and seen glimmers of Xifeng’s majestic future. But is the price of the throne too high? Because in order to achieve greatness, she must spurn the young man who loves her and exploit the callous magic that runs through her.

END_OF_DOCUMENT_TOKEN_TO_BE_REPLACED

Geek girl Elle Wittimer lives and breathes Starfield, the classic sci-fi series she grew up watching with her late father. So when she sees a cosplay contest for a new Starfield movie, she has to enter. The prize? An invitation to the ExcelsiCon Cosplay Ball, and a meet-and-greet with the actor slated to play Federation Prince Carmindor in the reboot. With savings from her gig at the Magic Pumpkin food truck (and her dad’s old costume), Elle’s determined to win…unless her stepsisters get there first.

This book moved me to tears so many times and sometimes they were even happy – this coming from someone who rarely cries while reading and never admits to it in public. To be honest, Cinderella isn’t my favourite fairy tale because I always thought she was kind of a coward for not standing up to her stepmother or sisters. It was refreshing to read this retelling because I finally understand how hopeless her situation was and at least our MC in this one, Danielle, is more rebellious than the character she is based on. The characters were the best part of the book for me. Things happened at a steady pace that kept me hooked and I finished the book in one sitting. The love story was not a case of insta-love and it had a modern spin to it. The “geek culture” portrayed in this is accurate and relevant. I enjoyed every little reference thrown in there for the benefit of all the fans – especially The Lord of the Rings ones. There are some minor flaws but because I rarely read books that override the fierce control I have of my emotions, I’m going to give it top rating.

This book is written for every geeky/nerdy kid/teen/adult out there. I would also recommend it to fans of fairy tale retellings. Some peanut butter sandwiches would go well with this book (you’ll have to read it to see why). As for the music, a mashup of sci-fi themes from Star Wars, Star Trek, Doctor Who, etc. would be perfect.