I warned you that I wouldn’t shut up about A House of Rage and Sorrow this week, so I’m sticking to that promise and bringing you a Q&A that I’ve been dreaming about since September last year. The author of one my favourite sci-fi series graciously agreed to answer my questions on the blog today. She also has a diverse anthology coming out soon, Color Outside the Lines, for which I have the ARC and am counting down the days until I can make time to devour it! She’s from Karnataka too and that makes me feel like I have a special connection with her. I’ll cut short the intro now and dive into the actual Q&A because I’m beyond excited to share this interview with you all! 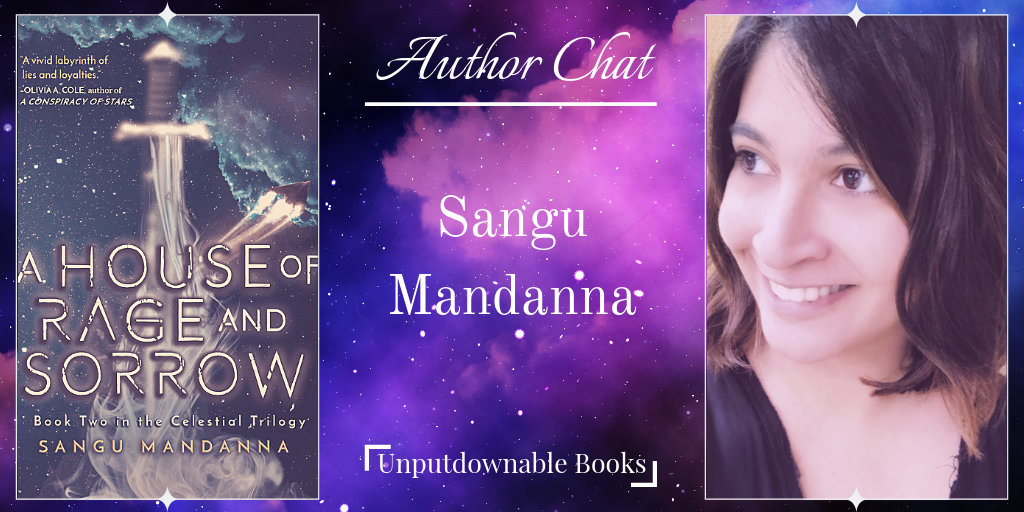 Sangu Mandanna was four years old when an elephant chased her down a forest road and she decided to write her first story about it. Seventeen years and many, many manuscripts later, she signed her first book deal. Sangu now lives in Norwich, a city in the east of England, with her husband and kids.

N: Hello, Sangu! It’s a pleasure to have you here on Unputdownable Books. Thank you so much for taking the time out to talk to me! I usually put the genre of the book in all my reviews but the Celestial Trilogy is hard to put into just one bucket. Would you classify it as sci-fi or a fantasy? What kind of research did you do for this project?

S: Both! It’s very much a space opera, which is to say it’s a combination of both science fiction and fantasy with a lot of personal character drama. So the kind of research I did included space and astronomy, but I will be the first to admit I took many liberties with the science in the novels! I also reread several of my favourite Mahabharata interpretations and retellings, like The Palace of Illusions by Chitra Banerjee Divakaruni and The Mahabhrata: A Child’s View by Samhita Arni.

N: I recently read A Palace of Illusions and liked it too! How old were you when the Mahabharata first captured your imagination? Why did you decide to incorporate it into this series?

S: I honestly couldn’t tell you how old I was! Like many Indian children, I had stories and folktales fed to me piece by piece by my parents and grandfather, often all out of order, often without anything distinguishing one from the next. The Mahabharata, the Ramayana, the Panchatantra
— for a long time, I couldn’t have told you which stories came from which collection, just that I knew them all intimately. So it was also this bone-deep love for these stories that meant I had to weave them into my own work. It was inevitable. And the Celestial Trilogy just happened to be the right idea at the right time! 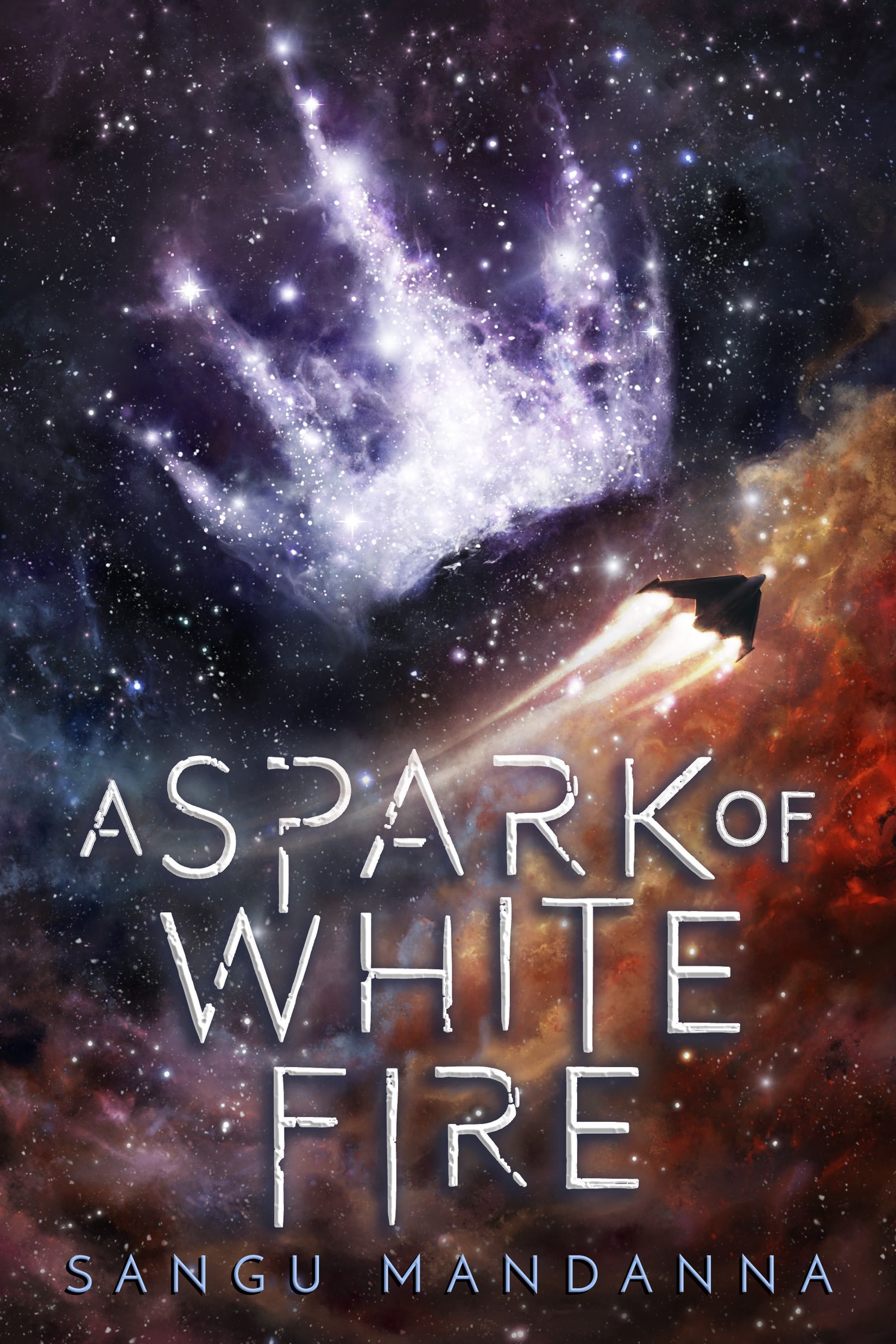 N: I grew up that way too and it was only after I read C. Rajagopalachari’s Mahabharata did I piece together a coherent narrative. Let’s talk about your other works for a bit. Your short story in the Hungry Hearts anthology really struck a chord with me. I’m curious to know, what is your favourite memory associated with Kodagu?

S: Thank you! Oh, I have too many. My dad’s family are Kodava and he still grows coffee there, so it was such a constant, essential part of my childhood. I guess if I had to pick one memory, it would be my little brother and I playing up on the yard where my dad dries his coffee beans. We’d kick a ball around, catch ladybirds and tiny frogs, climb trees, and just sit for ages looking out over the paddy fields below.

N: That reminds me of these lines in A House of Rage and Sorrow, “The beans come from Kodava, a kingdom on the edge of the star system. They grow the best coffee in the galaxy.” I couldn’t agree more! Let’s move on to some general stuff. I love your Twitter feed! What advice would you give aspiring authors about conducting yourself well on social media?

S: I’m not sure I always conduct myself well! I can be very mouthy! But then I think it’s okay to be mouthy, but don’t punch down. Take the time to listen. And if you’re passionate about something, talk about it. Don’t feel like you have to keep your mouth shut. If people find your politics or your views unappealing, they’re probably not people you would have wanted to work with anyway! 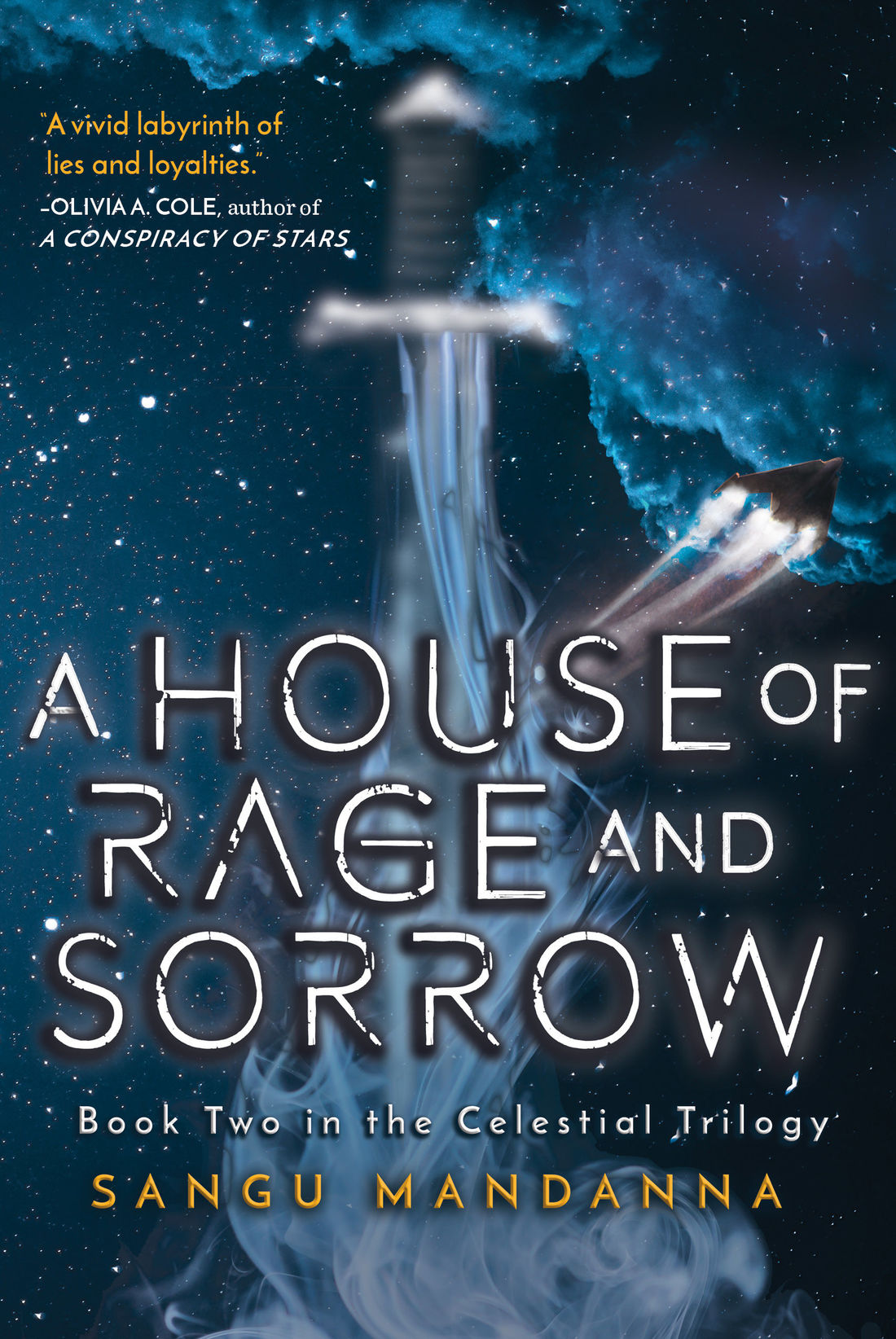 N: I don’t stick up for the things I believe in on Twitter a lot but you’ve inspired me to try harder! Speaking of trying harder, it’s a well-known fact that UK publishing is doing poorly in terms of diversity. What do you think can be done to increase the percentage of books with BAME characters?

S: I think the system needs work from the top all the way down. 32% of school age children are of an ethnic minority background, yet just 4% of children’s books last year featured BAME main characters, and of that only 1% were written by BAME authors. I mean, that’s a ridiculous gap! Publishers need to put more money into signing BAME authors instead of falling back on two or three bestsellers. Publishers need to hire more BAME editors, more BAME staff in general. Agencies need to hire more BAME agents and agents need to actively seek out work by BAME authors. I think it’s far, far too easy to claim an interest in diversity without actually putting the work or money in. Put the work in, put the money in. That’s the only way the kids of this country will actually get the representation they deserve.

N: This is my favourite answer and you’ve put things into perspective so well! Which books are your go-to recommendations for people looking to read more diversely?

S: I will always recommend The Hate U Give by Angie Thomas, Internment by Samira Ahmed, Aru Shah and the End of Time by Roshani Chokshi, and The Love and Lies of Rukhsana Ali by Sabina Khan. Other favourites include most books by Rick Riordan (they’re such a great entry into fiction for reluctant readers in particular, and RR does a wonderful job of really trying to be diverse), They Both Die at the End by Adam Silvera, Storm Runner by Jen Cervantes, and Brave Enough by Kati Gardner.

N: Wow, that’s an awesome list! There are quite a few on there that I haven’t read yet but I’m going to be bumping them up my TBR now. Lastly, what can we expect from you once this trilogy is done? Can you share any details with your readers?

S: I’m working on a middle grade fantasy inspired by folklore from Karnataka, a YA romantic fantasy, a superhero novel, and hopefully also a graphic novel! It’s still early days for all of them, though! 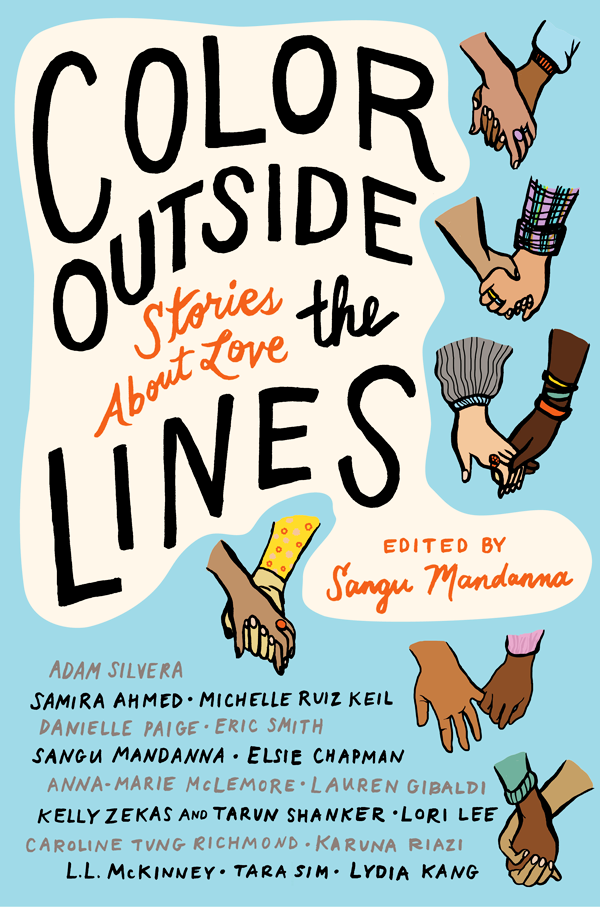 N: An MG fantasy based on folklore from Karnataka? You have me sold already! I cannot express how much I’ve been dying to see that in a book! It was an absolute pleasure to converse with you! I hope that A House of Rage and Sorrow can make it to the bestseller list! I wish you the best of personal as well as professional success and hope that what’s left of 2019 brings you much joy!

S: Thanks so much, Nandini!

5 Diverse Anthologies You Shouldn’t Miss in 2019

Book Review of A Spark of White Fire

Check out the synopsis of Sangu’s upcoming book –

One kingdom. One crown. One family.

“Maybe it’s time the great House of Rey came to an end. After all, what are we now? Just a house of rage and sorrow.”

Esmae once wanted nothing more than to help her golden brother win the crown of Kali but that dream died with her best friend. Alexi broke her heart, and she vowed to destroy him for it. And with her sentient warship Titania beside her, how can she possibly fail?

As gods, beasts, and kingdoms choose sides, Alexi seeks out a weapon more devastating than even Titania. Past lives threaten the present. Old enemies claim their due. And Esmae cannot outrun the ghosts and the questions that haunt her. What really happened to her father? What was the third boon her mother asked of Amba? For in the shadows, lurking in wait, are secrets that will swallow her whole.

The House of Rey is at war. And the entire galaxy will bleed before the end. 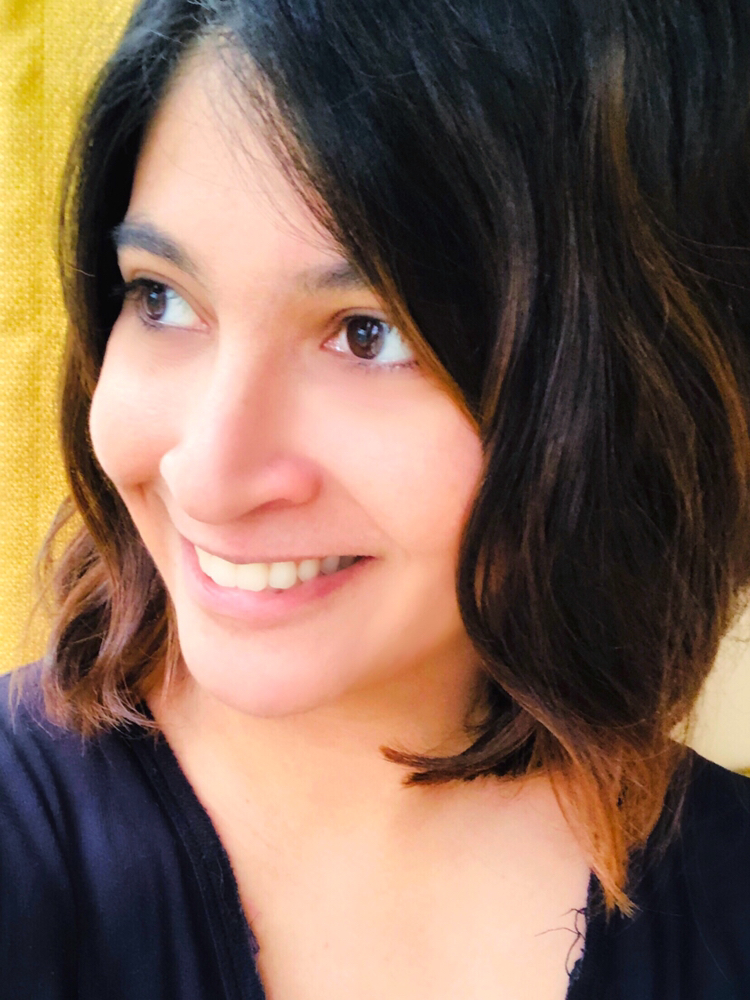 What did you think of this Q&A? Have you read any of Sangu Mandanna’s books? Are her books on your TBR? Do you have any diverse space opera suggestions? Let’s discuss in the comments section below! 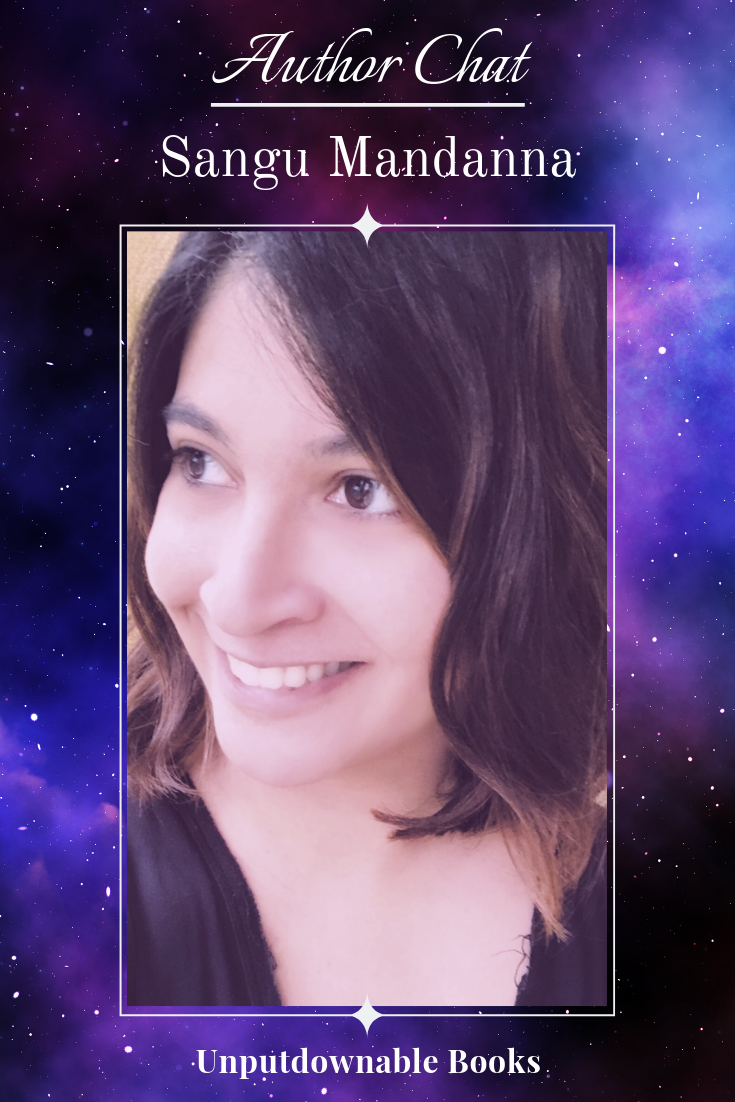 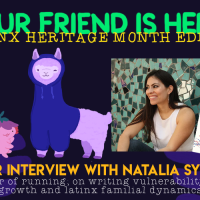 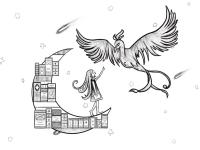 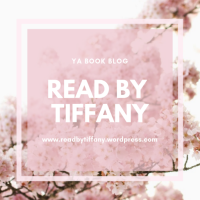